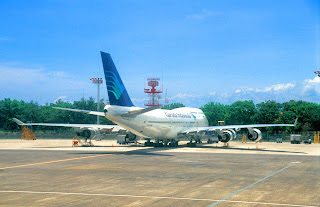 "Some 24 percent of a total of 346,942 foreign tourists who came to Bali in January-March this year were from Japan," head of the promotion section of the Indonesian Hotel and Restaurants Association (PHRI) I B Ngurah Kumbayana said on Saturday.
He said Australians who accounted for 10.3 percent of the foreign tourist flow were second on the list followed by Taiwanese (9.3 percent).Bali is home to the Bali tiger which is almost extinct; Bali cattle, graceful animals not like other cows; bats living in caves like the Bat Cave near Kusamba; sea turtles of Nusa Dua; the Jalak Bali or Bali Sterling (Leucopsar rothschildi) which has inspired countless painters
at May 23, 2007

Learning how you make knitting

We try explained to you about knitting for your business, products knit to many style and design can be also application to cloth, this ...